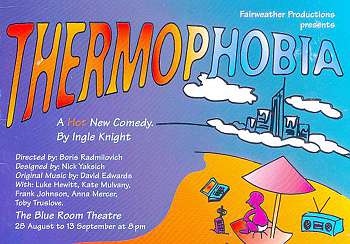 As a theatrical genre, the farce tends not to concern itself with big issues — a bit of mistaken identity, some slap and tickle and lots of exits and entrances are, more often than not, about as deep as it gets.
While these elements exist in Ingle Knight's Thermophobia, there is also a concern with matters which would never get a guernsey in, say, Run For Your Wife.
At the heart of Knight's very funny play — which is set sometime in the next century — there is a very serious concern with issues to do with an environmental final solution: if global warming doesn't get us, the next ice age will.
There is also a commentary on genetic determinism which suggests, among other things, that the human species is a particularly cruel and unpleasant one.
These are weighty subjects but Knight does not allow them to overpower the piece; rather, he allows the black comedy inherent in the subject matter to emerge in a last-laugh-at-the end-of-the-world kind of scenario.
To sustain the comedy along with the serious sub-text is an ambitious project, but Knight manages it with considerable flair. He also succeeds in tying together the play's quite complex narrative elements and in creating some wonderful, over-the-top characters.
The most memorable is Gunter (Luke Hewitt). We meet him initially at the St Petersburg airport, where he has been sent to fix the air-conditioning. He is an Australian technician permanently in transit, due to the fact that he has lost his passport and is confined to either planes or airports.
He encounters Dr Stein, a Russian scientist with a bad case of flatulence, who is on his way to Perth with a manuscript which demonstrates that a new ice age is imminent. Gunter has come to the alarming conclusion that he has one more flight before an air disaster catches up with him — his last five flights have been just before plane crashes and the progression he has worked out suggests his number is almost up.
When Dr Stein's turbulent tummy sends him on an urgent mission, Gunter seizes his opportunity and takes his place on the flight to Perth. On arrival, he encounters the dastardly Dick Delport (Toby Truslove), heir apparent to the Delport air conditioning corporate empire, and serial philanderer.
Of course, Dick is not keen to see Dr Stein's findings published, and he would very much like to see Gunter and the manuscript board a flight to oblivion.
Meanwhile, Dr Leicester (Frank Johnson), a scientist who once had a television show about evolution but who has now fallen on hard times, is equally keen to dispel the notion of global warming, due to his coastal real estate interests.
To divulge any more details of the plot would be to lessen the; enjoyment of following its con- volutions. What can be said is that the pieces fit together well and that the cast handles the multiplicity of roles with assurance.
Gunter is a superb comic creation, and Hewitt's outstanding performance gives him depth and energy.
He is well supported by Johnson and Truslove, along with Kate Mulvaney as Dr Leicester's daughter, Lucy, and' Anna Mercer as her wicked stepmother, Camille.
Boris Radmilovich's direction gives the piece a wonderfully anarchic feel. This is madness to savour and is a production which deserves to do well. 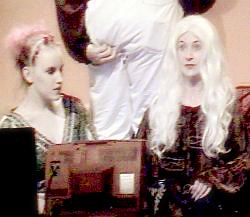 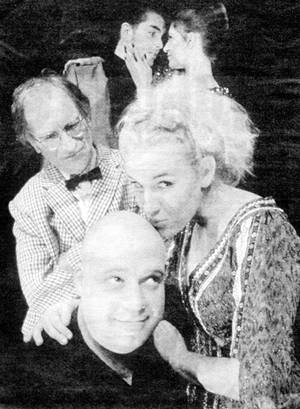