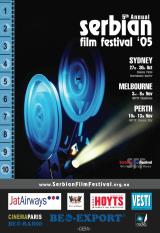 Opening of the Fifth Annual Serbian Film Festival in Perth will be held on Thursday, November 10th, 2005 at

The Festival will be opened by The Counsellor of City of Perth
Mrs. Eleni Evangeli


tickets will be available at the ticketing office of the cinema FROM  Tuesday 8 November.