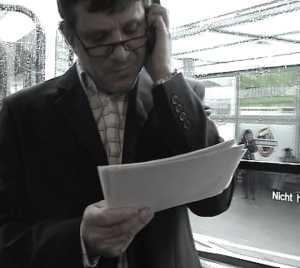 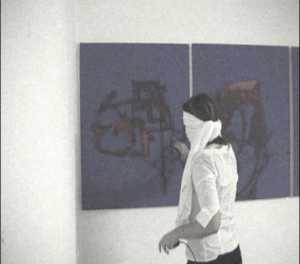 Each of the two projects consists of two performance intervals. First in the sequence was Katedrala, which took place over the course of two days in May 2005. The two days were marked as two intervals, in which I corresponded with two artists, Martin Heine and Nela Trifkovic. The artists were scheduled to instruct me over the telephone from two different locations (Zurich, Switzerland, and Melbourne, Australia). In the first interval, Heine was scheduled to answer the phone in Zurich at 7pm (Perth time) on Monday May 23, 2005. Trifkovic was scheduled to correspond as a part of the second interval from Melbourne at the same time on Thursday May 26, 2005. While riding their local public transport at the time of the phone call, Heine and Trifkovic had six printed images before them. The images were prints obtained from six randomly selected slides related to my memories in Yugoslavia. The images were outdated, slightly scratched, and blurry. The two collaborators were filmed by an accompanying person while describing the details of the given images. Simultaneously, at the gallery space in Perth I painted blindfolded onto six sequenced canvases while receiving the instructions.

The synchronicity was supposed to take place between the incoming sound of the telecommunicative directives and the blindfolded painting process. The telephone was connected to the speakers to enable a ‘real time’ transmission of the collaborators’ voices.  The canvases were displayed on one side of the gallery, while the slides were projected onto the opposite wall. The projected slides were identical to the images used by the correspondents. The images were sequenced equally, both in the gallery space and on the trams. The original intent was to change the sequence of the projections according to the reading of the same image. With the remote controller in my left hand I intended to synchronise the movement of painting action with my right hand onto the canvases. Painting acted as a response to the instructive image interpretation. Located a few steps behind me was a table with paint and brushes. Every time I needed to change the medium, or dip the brush into the paint, it was necessary to locate the palette, turn back and find the way back to the canvases.

The performative intervals were explored through the concept of multiple translations. The concept was explored through investigating ways by which decisions needed to be made by a range of people in the controlled performative environment. This can be illustrated through the intended synchronicity, voice transmission, gestural painting process and a sense of decreasing orientation in space. The multiplicity occurred on a micro and on a macro level. On a micro level, it occurred within the gallery space, starting from me as a receiving body of the incoming verbal information. The gestures appeared like the “extensions of the body” onto the canvas through painterly mark making.  On the macro level, there was the audience within the space that was exposed to the performative action and the incoming sound. The audience was exposed to the multiplicity of ways of seeing and perceiving the multidirectional influx of information.

There was a strong recurring loop between the ephemeral nature of changing projections and the materiality of painting that led the eye of the observer. The materiality of painting was formed through the action of attempting to represent with painted images the blindfolded reaction as directly as possible. This materialisation process was considered by me as the extension of the “receiving body.” The relationship between these signifiers resonated questions of identity. Why was the performer directed whilst blindfolded? Why did someone else interpret personal memories? Was the audience aware of the origin of the projected slides?

The outcome of the performance resulted in the movements of disorientation within the gallery space. The intention to perform in synchronicity appeared controlled during the time planning of the event. What really happened? The synchronicity between the projected images and painting of the designated sequenced canvases gradually collapsed. There were also elements of unpredictability of the telecommunication outcomes.

Most [The Bridge]: Inter media performance - an article by Tatjana Seserko (Tatjana Šešerko)

video - Most [The Bridge]