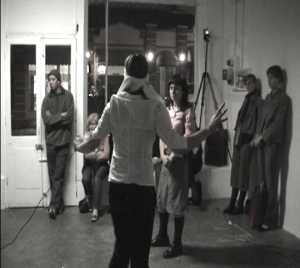 The assemblages of segments, driven through changes, in Katedrala initiated my intention to create the next temporal event, Most [The Bridge]. The assemblages of this consecutive project were measured by action and time corresponding to projection of video documentation of Katedrala’s remote performances. The spatial display of this event consisted of prepared blue-grey canvases hung on two opposing walls in the gallery space. The spoken directive language was contained within the obtained video document of Heine’s and Trifkovic’s performance on the premise of their local public transport. The two videos were projected in synchronicity over the grey canvases. I painted over them with white paint in order to gradually reveal the subtleties of the projections.

The revealing process of the projections with white paint implied a negative space. In this way, the content of the paintings was not supposed to incur a figurative and gestural representation of the image. On the contrary, the painting was a paradox where the materiality of it was meant to break down what was already visible and implied by video projections. The white paint emphasised portions of the moving figures of my collaborators from Katedrala. The projected body in given location became fragmented. The imprint of the painting itself did not leave a recognisable form on the canvas. Instead, there was left a freshly primed white surface, whose content could only be seen during the performative encounter.

The broken down synchronicity in Most [The Bridge] was conceived as a succession of the collapse of the ‘real time’ communication or monologue à deux of simultaneous actions in Katedrala. The two video documentations obtained by Heine and Trifkovic were edited in such a way to mimic each other’s duration. Heine’s objective interpretative performance in Zurich public transport was twice as short as Trifkovic’s analytic and associative image interpretation. For this reason, excerpts from Melbourne footage were removed, whilst the Zurich footage was extended. By modifying the footage duration, the synchronicity break down was embedded within the finalised video.

Trifkovic’s performance was documented with a video phone camera. The quality of this image incurs low resolution. The outcome of this projection resulted in a magnified projection of the low resolution image, which broke down into segments that resembled a pixelated tapestry projected on top of one of the canvases.

Heine’s performance was documented with a digital video camera. In order to sever the synchronicity in this image, the footage was gradually slowed down and increased again to its normal status by the end of the film. Reducing the speed of the footage segments established a finalised video outcome that resulted in a process of slow degradation of sound from its designated moving image.

Most [The Bridge]: Inter media performance - an article by Tatjana Seserko (Tatjana Šešerko)

video - Most [The Bridge]